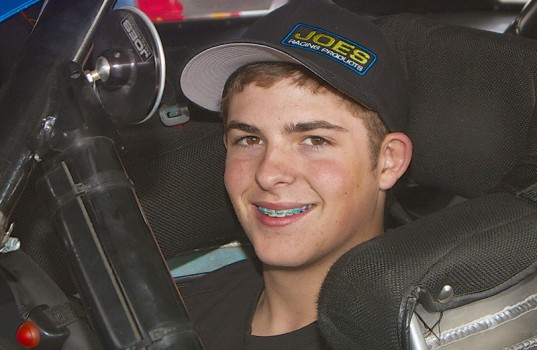 Jeremy Doss: Another Rising Late Model Star in the West

Each region has its top notch teenager that everyone is following. In the North it’s youngster Tommy Barrett, Jr. who just took his first NASCAR Whelen Modified Tour win at Bristol. In the Midwest it’s Ty Majeski, who leads the ARCA Midwest Tour points. In the South it’s a wide argument with the likes of Anderson Bowen, Kyle Benjamin, Dillon Bassett and others.

The answer to the top rising star in the Western region is simple . Seventeen-year-old Jeremy Doss has risen above the veterans, the record breakers and the best of yesteryear to lead the SPEARS Southwest Tour after eight races.

The success should come as no surprise. The Upper Lake High School student is a second-generation driver. His dad Mike Doss was a top level Super Late Model driver in his day. Even with that pedigree, the younger Doss has won at every level before stepping up into the SPEARS ranks.

“We have been really consistent this season,” said Doss. “With all top five runs and two wins we’re leading the points. Hopefully we can keep the finishing coming and finish off the championship.”

The transition period was a little rough. Doss won eight of 11 races in the Pacific Challenge Series in 2012 to win the championship. The Late Model Series help him prep for SPEARS Southwest Tour Series, but the level of racing was a big shock. His first start on the SPEARS tour was anything but pretty.

“Last year we started off and were 24th out of 24 in time trials at the first race,” said Doss. “We finished 14th that first race and just got better and better each week.”

During the first year Doss was a sponge and absorbed everything he could from guys like Jim Pettit II, who is a two-time series champ with 15 career wins. He also learned from Derek Thorn, who has 19 wins in series and won the K&N Pro Series West title last year. 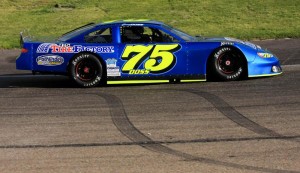 By the end of the year Doss became a contender. He picked up his first win at Stockton 99 and as a rookie was second in the final points.

“When you race with guys like Jim Pettit II and Derek Thorn they were quick to help when we started,” explained Doss. “Now not so much after the success we’ve had. Running with those guys is fun and beating them is an accomplishment in its self.”

Doss points to his father for getting him interested in racing and his crew chief Dale Dobbs who helps keep the operation running smoothly.

With a long layover before the next series race Doss will venture into new waters this weekend. Doss will make his first NASCAR K&N Pro Series West start at Kern County Raceway Park (CA) in Mike Naake’s No. 88. Doss has already won this season at the track in an unsanctioned event.

“We are trying to do some K&N this year to showcase what we can accomplish,” said Doss. “We have to stay humble and do it one race at a time and hopefully that will get us to the next race.”

Doss said there are plans to run more K&N even this year if the finishes are there.

“Money-wise we don’t have funding for much more than the Southwest Tour,” explained Doss. “It was goal for this season to run for the championship and we’re close to the end of that fight.”

Doss will get to travel to Pikes Peak International Raceway (CO) before the season ends. He already went to the Montana 200 where he was in the top 10 and finished second in the GET Rich Montana Gold 212.

“Competing is what keeps me going,” said Doss. “These SRL guys are top notch and these guys are best on the west coast.”

Even at 17, the California youngster dreams about running a race that is some 37 hours away.

“I’ve always wanted to run the Snowball Derby,” added Doss. “Derek Thorn talks about it a bunch. Maybe that’s a goal for next year.”