Michael House is the first official entry for the inaugural SRL National event at Citrus County Raceway in Inverness, FL. The $15,000-to-win, and $1,000-to-start event, is expected to draw a stellar field to the 3/8-mile paved oval on February 12th. House is a three-time Nashville Fairgrounds Speedway track champion, including championships in the track’s premiere Pro Late Model Division in both 2018 and 2021. 2021 saw House score the opening night victory, in a 28-car field at the facility, and secure his second championship in the highly competitive division, never finishing a race outside the top-five.

The Columbia, TN driver is primarily known for his success in the Pro Late Model ranks, scoring wins in multiple travelling series, while scoring multiple track championships. But he has also participated in Super Late Model events throughout the Southeast. He has taken part in limited starts in the Cars Super Late Model Tour, CRA Super Series, Southern Super Series, and the PASS Southern and National Tour. The winner on the former Southern Superstars Short Track Series hopes he can earn another Super Late Model touring series victory, this time at Citrus County Raceway. It is a return to the shorter tracks of his early racing career.

“I would like to start out by saying that I love racing on short tracks” House expressed. “I cut my teeth on a ¼-mile track just north of Nashville (Highland Rim Speedway), so anytime I get the opportunity to go run on a 3/8-mile track I get really excited.”

The 36-year-old competitor is thrilled to make his first start in the $15,000-to-win “SRL National Super Late Model 125”. He is also thankful to his car owner, sponsors, family, and the team that makes it all achievable.

“None of this would be possible without Jonathan Brown and Jen Brown”, House asserted. “They are the car owners and have done so much for me, for which I am so grateful. I would like to also thank US Tank & Cryogenic Equipment, Sundrop, AERO Race Wheels, Hamke Racecars, my wife for being so supportive, and all my crew for always helping out. I am really really excited about this race, and I am looking forward to a great season ahead.”

The first event for the new eastern swing of the SRL will see $15,000 going to the winner with $1,000 to start the February 12th feature event. House will take on touring teams from throughout the Southeast as well as the Super Late Model regulars at Citrus County Raceway, which is expected to include 2021 track champion Jarod Irvin. The SRL is in its 22nd season of operation and is based in the Southwest region of the country. 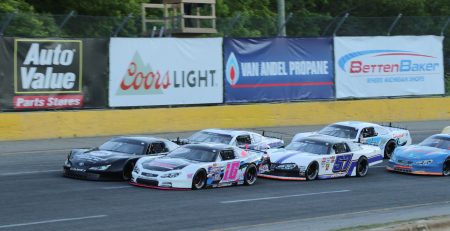 Updates & Helpful Information:  Money in the Bank 150 All competition will be held in accordance with the SRL NATIONAL... read more