The SPEARS SRL Southwest Tour Series will be visiting Kern County Raceway in Bakersfield, CA for the running of the “SPEARS Manufacturing 100 presented by Berchtold Equipment” on April 14.  It will be race number two of nine for the series in 2018.  The series will visit Kern County Raceway again on October, 27 for the penultimate event of the season.

Looking Back:  The series opened the season three weeks ago, when Jeremy Doss capitalized on a last-lap pass for the win at Madera Speedway.   Derek Thorn was the victim of an incident in front of him, which caused Thorn to take evasive action to avoid the spinning car of Tracy Bolin.  The result was a second-place finish behind the 21-year-old Upper Lake, CA driver.  The 28-car field was the most at a season opening event since 2013 at the same facility.

Driver Highlight #1:  Craig Raudman is ready for his return to Kern County Raceway after being involved in a Lap 86 accident at Madera Speedway.  The Dave Reed Racing, Approved Memory, Lucas Oil Chevy was heavily damaged in the incident, which resulted in a 23rd-place finish.  Raudman will be looking to climb out of his championship hole at a track in which he has found a great deal of consistency.  In eight career starts at the facility, Raudman has seven top 10 finishes, including a 10th in his first Winter Showdown in 2018.  The 2001 NASCAR Southwest Tour Series Champion enters the affair with a great deal of enthusiasm and is confident he will have a strong run.

“I am excited to get back to Kern, as we had a great car at the (Winter) Showdown and we are bringing the same car again,” Raudman told Speed51.com.  “We really need a top-three finish to get back in the points after the disappointing finish at Madera.  Bond (Suss) has been giving me really good cars and I feel like we’re knocking on the door for our first win of the season.” 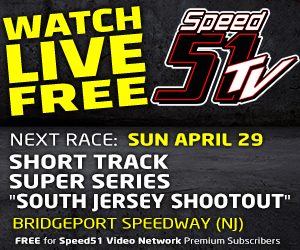 Schlick also feels confident headed to Kern County Raceway, as he has a runner-up finish to go along with a ninth-place effort at the facility.  His only other start was a 20th-place result last October, in which he lost two laps after a blistered right rear tire interrupted his top-five run at the halfway break.

“I feel pretty good going into this weekend at Kern,” Schlick said.  “I’ve had really balanced race cars there in the past and we have been close to winning there.  There will definitely be some fast race cars there this weekend, but if I’m in the right place at the right time I’m planning on trying to come home with the victory.”

Record Field:  There are currently 29 Super Late Models entered for this weekend’s event.  The current record at Kern County Raceway is 28 cars, which was set in October of 2016.

Kern Winners:  The last eight SRL winners at Kern County Raceway will be represented in this weekend’s field.  Derek Thorn leads the way with five victories, while Blaine Rocha, Jeremy Doss and David Mayhew have one each.  The only former winner not present is the inaugural victor, Jim Pettit II.

Fast Time: Derek Thorn has qualified quickest in every SRL championship event at Kern County Raceway, except for the first and last contests at the track.  Thorn was beat out by Jeremy Doss at the inaugural event and Buddy Shepherd at the October 2017 affair.  Shepherd will be back behind the wheel to defend his qualifying title, one in which he has already defended at the Winter Showdown, winning the Bobby Durrett Fast Time Award worth a cool $2,000.

Rookies:  Six Rookie of the Year candidates are currently entered in this weekend’s event.  Buddy Shepherd currently leads the rookie standings followed by Cole Moore and Jack Wood.  They will be joined by Kyle Neveau, Cole Cabrera and first-time starter Tanner Wattenbarger.

Winner’s Share:  The winner of this weekend’s race will receive $5,000 thanks to the “Winner’s Bonus” provided by Comp Cams and FAST – Fuel Air Spark Technology.

Looking Ahead:  The next race for the SPEARS Southwest Tour Series is the $10,000-to-win event at The Bullring at Las Vegas Motor Speedway on May 5.  The high-paying winners share is compliments of David “Homie” Mulcahy and Retro Custom Metals.  Homie is a long-time supporter of the series and veteran racer Keith Spangler, who will make his 88th career start this weekend.