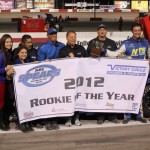 Bakersfield, CA – A record number of eighteen drivers will be eligible for the SPEARS Southwest Tour Series Rookie-of-the-Year title in 2013, the most ever in the series 13-year history.

“We’ve been blown away by the number of new drivers, both young and old, who plan to compete with us this year,” stated the SRL’s Larry Collins.  “There’s no better compliment to a race series than to see new teams coming on board to compete.”

To be eligible for Rookie-of-the-Year honors, a driver may not have competed in more than five SPEARS Southwest Tour Series event in one season, additionally, each driver must submit in writing their request to compete for the rookie title.

“Last year we had a number of teams come to our events just to watch and get a feel for the series.  Now we are seeing many of those teams committed to the SPEARS Southwest Tour in 2013.” Collins added.

The SPEARS Southwest Tour Series opens its season on March 16th at Madera Speedway with the “Melo’s Gas and Gear 151 presented by 51 Fifty Energy Drink.”