admin2022-05-13T11:32:02-07:00
By admin News 0 Comments
ShareTweet
Bakersfield, CA – Jace Hansen is coming off a victory in his last Super Late Model race at Colorado National Speedway on April 30. He will look to make it two in-a-row on May 21st in the “Spears Manufacturing 100 presented by Pinnacle Peak Steakhouse San Dimas” at Irwindale Speedway. Hansen has a best Spears SRL Southwest Tour Irwindale finish of third, in the 2020 “All-Star Showdown 200” behind Preston Peltier and Casey Roderick. Hansen will make his fifth start at the facility and 20th overall. The recent win gives the Hansen momentum heading into Round #4 of the series schedule.
“A win at home really helps keep the guys motivated at the shop preparing for Irwindale”, Hansen stated! “It makes the team even more hungry for our first tour series win, but we know those aren’t easy to come by. The whole group is putting a ton of effort into making sure we bring a competitive race car. The time and effort is there! Irwindale is one of my favorite tracks, so hopefully with this little boost of morale, and a little luck, we will be battling for another win next weekend!”
The “Spears Manufacturing 100 presented by Pinnacle Peak Steakhouse” will see the SPEARS SRL Southwest Tour Series visit Irwindale Speedway for the 23rd-time its history. The event will pay $6,000 to the winner, thanks to the $1,000 “Winner’s Bonus” from Loyd McGhee and J&M Racing. It will also pay $500 to the Fast Qualifier and another $500 to the leader at lap 17. Each of those bonuses are donated in honor of Michael Atkinson (AKA Mike A) who passed away on February 11.
Celebrating its twenty-second season in 2022, the SPEARS Southwest Tour Series is a regional stock car series competing on paved ovals in the southwestern portion of the U.S. “The SPEARS Southwest Tour Series…Where the Champions Race”. 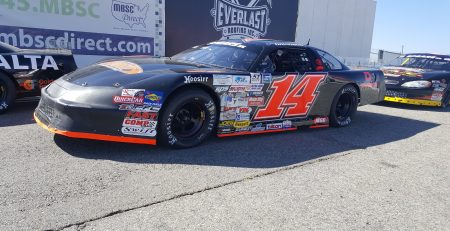