Bakersfield, CA – The Boss is back! Jeremy Doss had a near perfect weekend at the 34th Annual “October Classic” at Kern County Raceway Park (CA). First, he earned the PFC Brakes “Zero Drag Fast Time Award” He then took the lead from Blaine Rocha on a lap 40 restart, leading the rest of the way to score his 11th career victory in the Spears SRL Southwest Tour Series. The Upper Lake, CA driver also closed the gap on championship leader Jacob Gomes, entering the season finale at Irwindale Speedway (CA) on November 12th. It was his first win in the Bob Lyon owned Super Late Model, as well as his first visit to Victory Lane at KCRP since 2014, his sophomore season in the series.

“We were able to put it on the pole in qualifying, which is funny because we worked on long runs all weekend, but we had the short speed as well” Doss stated. “We finally had a good draw as well and everything seemed to work out for us. We had a really really good racecar, and we took care of it. Honestly, it was the best car I have ever had here, and it made my job a whole lot easier.”

Doss continued, “I’ve got to hand it off to Cody Glick, Hamke Racecars, the Lyon family, Alliance Rental Solutions, Shell Roofing, Earnest Performance, PFC Brakes, Horsepower Project, Pitstop USA, Swift Springs, and everyone who is on board with this program. It was good to go get a win and I’m looking forward to Irwindale and hopefully we can do the same there.”

After Doss set quick time, the top eight drivers redrew for position at the front of the field. Blaine Rocha grabbed the lucky number “one” card to sit on the pole. Andy Allen drew the number “two” with Doss third and championship rival Jacob Gomes fourth. Chris Davidson lined up fifth, after the most recent winner on the “Tour” Buddy Shepherd, had a vibration during qualifying and had to start in the rear after repairs. Austin Herzog and Dustin Ash rounded out the top-eight redraw participants.

At the drop of the green, Rocha jumped out to a big lead as Doss and Gomes moved by Allen to occupy the top-three. Gomes was able to get under Doss on lap three, to move into the runner-up position, but Rocha continued to move away from the field. The top-five of Rocha, Gomes, Doss, Allen, and Herzog ran in formation, as Cale Kanke ran side by side and nose to tail with Herzog for the final top-five position. Lap 32 found Doss finally getting under Gomes for the runner-up position, as a Competition Caution fell on lap 40 to slow the field.

On the restart, Doss was able to use the outside groove to take the lead from Rocha, as Herzog and Kanke continued their battle for fifth. Despite heavy racing, and battles throughout the field, the top-five remained the same when the planned lap 80 caution fell for the teams to make adjustments.

After the break, Doss retook the lead, as Andy Allen used the outside line to advance to second from fourth starting. Kanke also took advantage of the outside line to bounce to fourth behind Rocha. Rocha’s fine run ended on lap 91, however, when he lost power coming off of Turn 4. Kanke, who was running on his bumper, was able to avoid the slowing Rocha, and a big pileup, to earn the Fluidyne High Performance “Cool Move of the Race”. The field continued under green as Kanke was able to get under Allen on lap 97 to take up chase of Doss. But without a caution, the son of M.K. Kanke was unable to make a serious challenge for the top spot. On lap 109, Chris Davidson was able to get by the fifth-place running Buddy Shepherd to put himself into the top-five. The Texas driver engaged with Andy Allen and Jacob Gomes for third, as Shepherd tried to get back into the top-five.

But as the checkered flew, the finishing order remained the same. Doss crossed the line first with Kanke following. Allen crossed the line third, but was later disqualified for not clearing tech. This moved Gomes up to third, with Davidson and Shepherd the top-five. After the race, Doss recalled his battle with Rocha, and the big lead he overcame, thanks to the lap 40 Competition Caution.

“I felt like he (Rocha) went a little too hard early” Doss recalled. “I saw that and felt like before that lap 40 caution that he was already backing up to me. When I got the outside, I knew I would be able to pinch him down a little bit and get the position. I was able to maintain it from there, and luckily the car was really good. I was actually a little bummed that he broke because that was five points gone towards the championship. But all in all, it was a good night, and it feels good to be in Victory Lane with Bob Lyon.”

“It (the win) makes me feel good, but like I have been telling everyone, I’m just chasing wins at this point. If we get the championship, cool. I can’t let it change my life one bit. I just gotta keep focusing on the future and everything going on with it.”

For Cake Kanke, his “October Classic” finish was a career best in the series. It comes on the heels of wins in his Sport Mod on the dirt and continues his momentum as of late.

“It just tops off a few great weeks”, Kanke exclaimed! We won at Ocean (Speedway), then finished second the next night. We won the Budweiser Nationals (at Bakersfield Speedway) and now we are second here. It is pretty exciting.”

Kanke spent most of the first 80 laps locked in a battle with Austin Herzog for fifth. But after the Competition Caution, his car came to life after a few adjustments to his Dodge Charger, an outside line restart, and quick reflexes to miss a slowing Rocha.

“We made an adjustment on the car, and it helped me out a lot, and that is where I was really struggling to get by guys. I had a great restart, and the outside (line) went, and I was able to push it in there. I don’t know what happened to (Blaine) Rocha, but that was close. I thought we were all wrecking getting off of four, but in the end the car turned good, and we were able to come home with  a great finish.”

The series will close out the season on November 12th in the “2022 Spears Southwest Tour Series Finale – Prelude to the Showdown 100”. It will be shown LIVE on MAVTV, and will feature one of the biggest, if not the biggest field of the 2022 season. 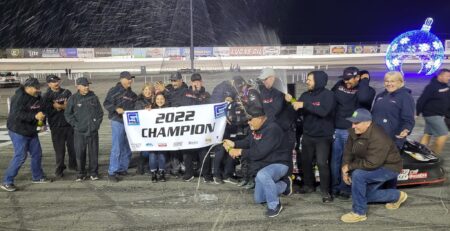 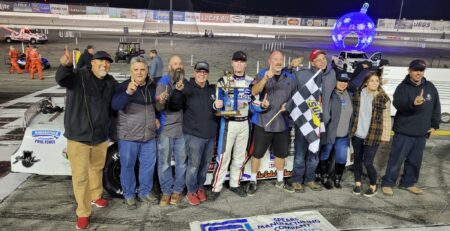 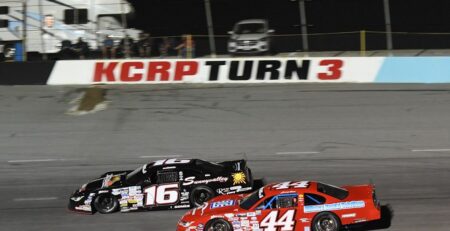 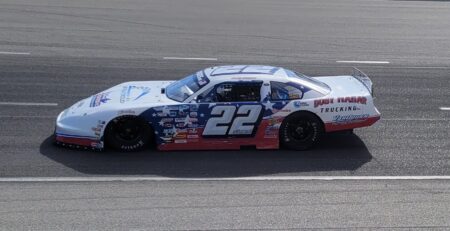 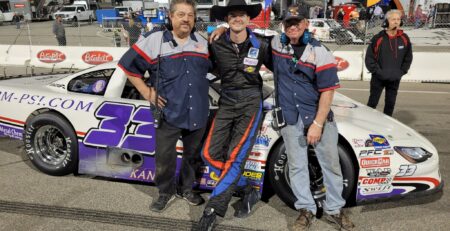 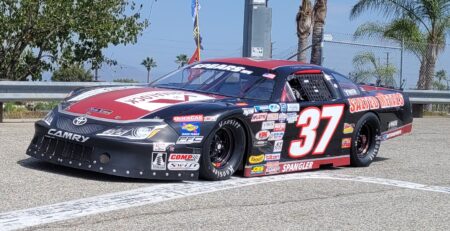 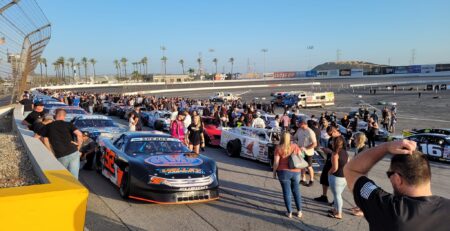 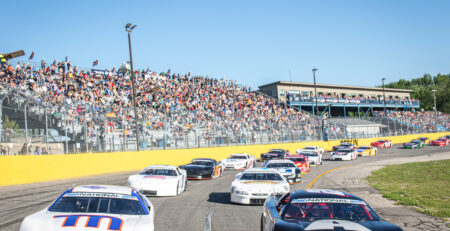 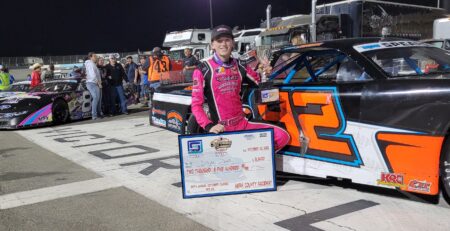