Bakersfield, CA – Nick Joanides led only one lap in Saturday night’s Spears Pro Late Model Series “Spears Racing.TV 60 presented by Sigma Performance Services”, but it was the right one. In what could be the young series most exciting finish, Joanides took advantage of a last lap dust-up between leader Dylan Zampa and Dean Thomson to score the victory in his first series start, in front of a large crowd at Irwindale Speedway. The win came in a new Jackson Racecars Pro Late Model, in its second outing, and earned the veteran racer $2,500 in front of a field of 19 Pro Late Models.

“I can’t believe it”, Joanides exclaimed in Victory Lane. “I’ve had some exciting racing out here, that definitely qualifies as the most exciting ever! I can’t thank Jan Qualkenbush enough! I am definitely wore out. Joe (Nava) and this whole team have been busting their butts. Tony Jackson, and the guys have been trying to get the push out of it. We were tight at the end, but those guys wanted to go to the bottom so bad, and we found that line up top and it was door banging up there with Dean (Thomson), Jeffrey (Peterson) and everybody up there. It was a great race! I’ve been racing 30 years, and that is the most exciting one I have had!”

Bradley Erickson began the day by setting Fast Time over the 19-car field. Jeffrey Peterson was second followed by Dylan Zampa, Sean Woodside, Cody Kiemele, Nick Joanides, Dean Thompson, and Kyle Meyer, who made up the redraw participants. Dylan Zampa pulled the number one pill, with Thompson lined up alongside. Woodside and Erickson made up row number two with Joanides pulling the unlucky number eight to start mid-pack.

Fast qualifier Bradley Erickson stalled before the green ever flew at the ½-mile oval and failed to start. When the green came out, Zampa jumped to the lead, but Thompson led lap two. Zampa battled back under Thompson to lead lap three and finally cleared him on lap six, using the extreme low line. The field ran 40 laps to a competition caution with Thomson chasing Zampa with Peterson, Joanides and Cody Kiemele the top-five. The restart found Zampa eking out a short lead before a debris caution flew again on lap 47, setting up the final run to the checkers.

The restart saw Thompson battle to the lead, using the high side on lap 50, with Joanides getting around Peterson for third. Zampa battled back once again, retaking the top spot with a power move to the bottom of Turns 1 and 2 on lap 54, to lead lap 55. Thompson battled back the following lap through one and two, using the bump and run to lead lap 56, as Joanides inserted himself into the battle going three-wide. As Thompson led laps 57 and 58, Zampa and Joanides battled side-by-side for second on the bumper of Thompson. In Turn 1, Zampa returned the favor with a bump and run on Thompson with less than two laps to go.

As the field raced to the white flag, Thompson nudged Zampa coming out of Turn 4. As the leaders crossed the start/finish line, Thompson and Zampa made contact, spinning Zampa to the infield. Using this opportunity, Joanides shot to the outside of Thompson in Turn 1 and used the momentum to take the lead, halfway down the back stretch. In Turns 3 and 4, Thompson dove to the bottom, but couldn’t squeeze up in front of Joanides off of the final turn. Joanides was able to use the momentum once again on the topside, to take the checkers first, with Thompson on his tail. Kiemele snuck by Peterson for third, as Ricky Schlick followed in fifth. After the race, Thompson was relegated to the last car on the lead lap, by rule, for spinning the leader. This moved Seth Wise into the final top-five position.

After the event, Cody Kiemele was excited for his best career Spears Pro Late Model Series finish, having the best seat in the house for the battle in front of him.

“Oh my gosh, I feel like it has been so long since I have done good here or anywhere this year”, Kiemele exclaimed. “I can’t thank my crew enough for everything they have done this year. Adrian, my dad, Jerry Cook, EJ Robbins, Josh Fergeson. Of course, I have to thank all my sponsors and everyone who has helped put this together this year. The car was really fast. Oh my gosh I can’t believe this.”

Sean Woodside came home sixth followed by Mike Beeler, Ryan Martin, Christian Bazen, and Corey Neveau, who completed the top-10. 17 cars took the checkered, with 14 Pro Late Models on the lead lap. The next event on the schedule for the Spears Pro Late Model Series is a trip to Stockton 99 Speedway for the Bischofberger Brawl, worth $15,000-to-win on October 1st.

Event: The “LiUNA – Feel the Power 100 presented Pinnacle Peak Steakhouse” will be the seventh event of the... read more 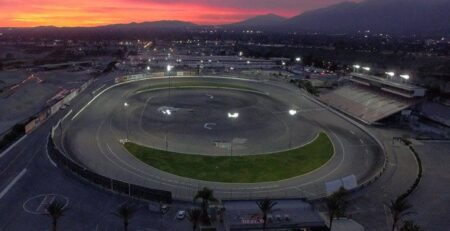