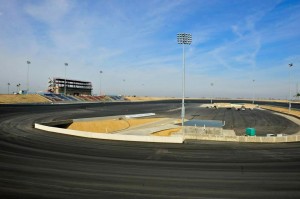 BAKERSFIELD, CA – This morning at a 7am meeting, James Vernon of Kern County Raceway Park and Larry Collins of the SPEARS Southwest Tour Series met and signed contracts for a September 7, 2013 race date.

“James and everyone involved are so busy working to get the track ready for the upcoming season that we just didn’t have the opportunity to meet to finalize the contracts until this morning,” stated Collins.  “The new half-mile at Kern County Raceway Park was designed with Tour cars in mind, and the first race for our series at the new track is going to be something that no one will want to miss.”

With the signing of the September 7th race at Kern County Raceway Park, the SPEARS Southwest Tour Series now fills its ten-race schedule for 2013.  The SPEARS Southwest Tour Series will start its 2013 season at Madera Speedway on Saturday, March 16th and conclude at The Bullring at Las Vegas Motor Speedway on November 16th.  The ten-race schedule will include three new venues for the series, including Kern County Raceway Park, Redwood Acres Raceway in Eureka, CA, and the one-mile oval of Pikes Peak International Raceway just outside of Colorado Springs, CO.  The balance of the schedule will include two Madera Speedway events, two at Stockton 99, two at The Bullring, and one event at the 3/8 mile Rocky Mountain Raceway located just outside of Salt Lake City, UT.