Todd Gilliland has a knack for making the most out of his opportunities.  The 15-year-old racer from Sherrills Ford, North Carolina will attempt to continue that trend when he makes his debut with Kyle Busch Motorsports during the 2nd Annual Winter Showdown at Kern County Raceway Park. 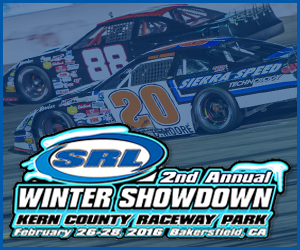 “We wanted to go out there last year but everything just didn’t come together last minute,” Gilliland told Speed51.com powered by JEGS.  “I’m super excited to be going out there my first time and seeing Kern.  Everybody I’ve talked to said it’s a really nice facility so I can’t wait to get out there and experience it for myself.”

Gilliland, the son of NASCAR Sprint Cup Series driver David Gilliland, made history one year ago by becoming the youngest driver to visit victory lane in both the NASCAR K&N Pro Series West and ARCA Racing Series. Additionally, he added a CARS Tour Late Model Stock victory to his resume during the series’ inaugural season.

Now, after a successful year taking advantage of his opportunities and driving for his family-owned David Gilliland Racing team, Gilliland is ready to strap in behind the wheel of the potent Kyle Busch Motorsports Super Late Model.  His journey driving for the team will begin on February 28 at the Winter Showdown where $30,000 is on the line for the winner of the 250-lap race.

“I feel like in DGR stuff that we always had a chance to win, but it’s going to be awesome to race one of KBM’s Supers,” Gilliland stated.  “They’re always super dominant wherever they go, so we’ll see if we can do the same.

“There’s a lot of great guys coming from both the East and West to go out there.  It’s going to be one of the toughest races I’ve ever been in, but we’ll see how it pays off.  It’s just whoever has the fastest car and then you have to see how it all plays out.”

The trip out to Bakersfield, California will be a relatively new experience for Gilliland.  Racing in the southeastern part of the country he is not accustomed to racing qualifying races like the three 50-lap qualifiers that are used to help set the field at the Winter Showdown.  His only prior experience with qualifying heat races came at Martinsville Speedway (VA) during the annual Martinsville 300 Late Model Stock Car race.

“I followed along with it a little bit last year, but it’ll definitely be a new experience for me,” the third-generation driver admitted.  “Martinsville has heat races and stuff like that, but it’s pretty much the only race I’ve done like that.  It will be different for sure but I’m excited.”

Teaming up with Kyle Busch Motorsports provides Gilliland with an opportunity to follow in the footsteps of recent KBM Late Model drivers such as Erik Jones and Christopher Bell, who have both moved up to the higher levels of NASCAR.  Although some people may believe there’s pressure to succeed because of the past success KBM has experienced, Gilliland doesn’t see it that way.

“In some people’s eyes maybe there’s pressure, but I’d say it’s more about confidence for me because Kyle stands behind his stuff and he’s willing to get in it and drive it,” Gilliland explained.  “That just shows how good of an organization they are.

“I think that’s what me and my dad have always been about, just quality over quantity because you want to make the most out of every ride.  It’s been awesome to get the rides that I have and I’m very fortunate for that.”

In addition to having the equipment to get the job done on the race track, Gilliland will have another resource to go to in the form of 2015 NASCAR Sprint Cup Series champion and team owner Kyle Busch.  Having both his father and Busch to lean on for advice assures Gilliland that he’ll find answers to any questions he may during his racing journey.

“My dad has helped me any way he can for every single year that I’ve raced,” he said.  “He’s been great and it’s just going to be even better to have another resource in Kyle to go to.  With his experience I think it will be awesome.”

According to Gilliland, a win in his debut with Kyle Busch Motorsports at the Winter Showdown would be “awesome” because of the prestige the event has already earned in just two years.  He’s also hoping for a strong run that will give him additional confidence heading into his second NASCAR K&N Pro Series West race of the season with Bill McAnally Racing at Kern County.

“It’d be a great confidence booster.  Kern is the second race on the K&N West schedule so I think that will give me more confidence going in there with a K&N car also.  I think it will be great.”